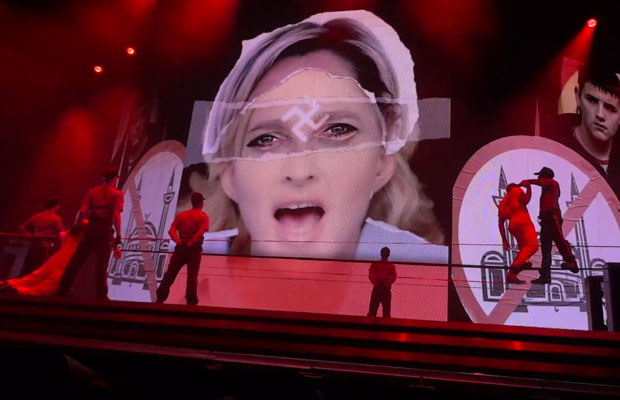 Marine Le Pen is threatening legal action if Madonna projects a Swastika on her face again, during her upcoming Paris concert.

During a concert in Tel Aviv, Israel last week, Madonna used French politician Marine Le Pen’s face as part of a controversial video montage displayed on stage during one of her performances. Le Pen is the head of France’s far-right politial party, the National Front, a group which has long been accused of racism.

In the montage (above) a swastika is placed over Le Pens Face during the song ‘Nobody Knows Me’. The film morphs Madonna’s face with a number of famous figures, including Chinese leader Hu Jinatao, US Republican former presidential candidate Sarah Palin and Pope Benedict XVI.

Le Pen’s eyes and forehead then appear for a second before a swastika and the eyes of Adolf Hitler are superimposed onto the French politician, who has now told Le Parisien “If she does that in France, we’ll be waiting for her”, adding…

“By the way, has Madonna given back the children she stole from Africa? Or did she end up buying them?… She’s an old singer… She no longer knows what to do to get people talking about her because her songs don’t work anymore.”

It’s also being reported, Le Pen’s party is threatening legal action if Madge continues to display the politician’s swastika-emblazoned likeness in France. A party source says “We are not a Nazi party, and object to being depicted as such” and party lawyer Wallerand de Saint-Just has confirmed he is looking into possible legal action.

Marine Le Pen pledged to reform the party after taking over the leadership from her father Jean-Marie Le Pen last year. He is a convicted racist and anti-Semite who has in the past denied that the Nazi Holocaust actually took place during World War II. Despite this, he came runner-up in the French presidential election in 2002.

Do you think that Madonna was right to use the image of a Swastika on Le Pen’s face, given her political parties controversial history and stance on race issues?

Or, do you think this is simply a publicity stunt on Madonna’s behalf, and an incredibly distasteful one given it saw her depict the image of a Swastika during a concert in Israel of all places?

Let us know your thoughts in the comment section below.