Twas The Season For Celebrity Breakups 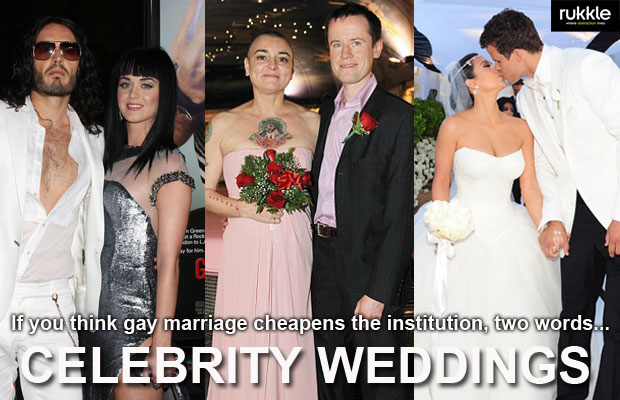 While we were all stuffing our faces and drinking far too much wine, some celebs were drinking for a whole other reason.

The sanctity of celebrity love and marriage was given a much needed boost over the holidays with two high profile splits, one, after just 16 days (which even surprised us).

Let’s start with Sinead O’Connor, who, after initiating a search for a ‘sweet sex-starved man‘ online in August, found what she was after, got hitched in Vegas in December and then after a really tough and troubling period (two weeks) along with much soul searching, decided to file for divorce on … after 16 days. Speaking about the Split, Sinead says…

“Within 3 hours of the ceremony being over the marriage was kyboshed by the behaviour of certain people in my husband’s life. […] I saw his life leave him because of how people close to him reacted. And I can’t take anyone’s life. And a woman wants to be a joy to her husband. So.. U love someone? Set them free”

Then, on December 30th, Russell Brand filed for divorce from Katy Perry… and so close to New Years Russell, how inconsiderate! He released a statement that said he still ”adores” his wife and hoped they would remain friends.

”Sadly, Katy and I are ending our marriage. I’ll always adore her and I know we’ll remain friends.”

Meanwhile, Katy has been invited to stay with Rihanna in Barbados following the split. A source told The Sun…

“Katy is hardly speaking to anyone right now, but she called Rihanna as soon as she heard Russell was filing for divorce. Katy was embarrassed about calling her parents as they’d been so against Russell in the first place”

Did we mention that one of the reasons still being cited by people against gay marriage is that it cheapens the institution?

What do you think of these holiday splits? Who do you feel sorry for the most? Let us know your thoughts in the comment section below or connect with us on Facebook or Twitter.