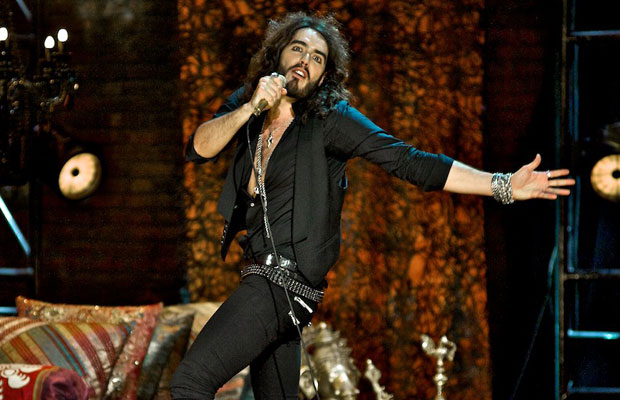 Russell Brand took down a heckler over the weekend.

During his New Jersey show on Saturday he branded the heckler “an enormous echo of nothingness”.

Russell Brand hilariously and absolutely owned an audience member who thought it would be a good idea to disrupt the comedian’s routine by shouting out the name of his ex-wife, Katy Perry over the weekend.

The heckler was said to have repeatedly shouted Brand’s ex-wife’s name during his show in Atlantic City, New Jersey on Saturday night (May 5). A witness told Life & Style…

“He actually climbed down off the stage, made the crew turn the house lights up and told the audience to point the guy out. He tore into him for maybe three or four minutes, standing right there in the middle of the crowd with the lights up.”

As can be seen in the video above, once he located the audience member yelling Katy’s name, Russell had some choice words for him…

“It’s you, is it? Oh, dear. I was hoping that your personality was just a result of physical beauty. But then I saw you. I thought, ‘This guy’s confident, probably, because he’s incredibly handsome,’ but look at you. You look like somebody who’s fallen off the outside of a church.

And what is it that you have rattling around your mind, some bizarre combination of alcohol and idiocy…some cocktail of nothing. And yet the confidence to continue shouting. They say of course, don’t they, that empty vessels make the most noise. What an enormous echo of nothingness from you.”

The disruption in Russell’s show turned out to be quite the surprise of entertainment for the audience. To hear Russell’s rant in full check out the above video.