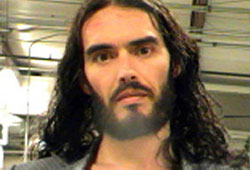 Russell Brand was arrested Thrusday and released on $5,000 bail.

The arrest came following allegations the British actor and comedian threw a paparazzo’s iPhone through a window.

Russell Brand has been released from jail after he was arrested on Thursday (March 15) for allegedly throwing a paparazzo’s iPhone through an office window. He was released on a bail bond of $5,000.

According to TMZ, Brand was booked on two counts of criminal damage to property, after turning himself in to the New Orleans Sheriff’s Office. See his arrest mugshot above.

From here, Brand will eventually face court and is set to face a $700 fine as well as legal and damage costs.

In typical @rustyrockets style, he responded to the incident on Wednesday tweeting that throwing the phone had been a “tribute” to late Apple creator Steve Jobs…

Since Steve Jobs died I cannot bear to see anyone use an iphone irreverently, what I did was a tribute to his memory.

What do you think of this story? Let us know your thoughts in the comment section below or share this story on your favourite social networking site…