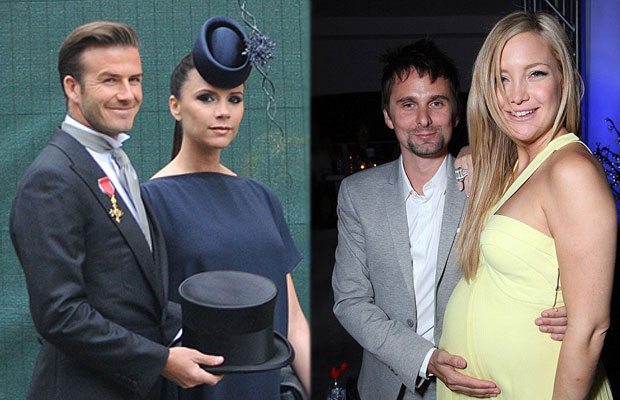 In today’s edition we have two new celebrity babies, a royal visit, a ‘fyah’ and more!

Two new celebrity babies entered the world at the weekend!

David confirmed the news on his Facebook page, after he and Posh welcomed the baby, who weighed 7lb 10oz.

Kate Hudson gave birth to a “healthy baby boy” at the weekend also!

Congrats to both sets of new parents from rukkle!

The Duke and Duchess of Cambridge spent the weekend in “the Golden State and the City of Angels”.

One of the celebrity highlights of the three-day Southern California tour that took them from Santa Barbara to the streets of L.A.’s Skid Row, was the glamorous BAFTA event in Los Angeles where the couple met Nicole Kidman, Tom Hanks, Barbra Streisand, Jennifer Lopez and many others.

The royal newlyweds, both 29, who also traveled to Canada during this trip, boarded a British Airways flight at Los Angeles International Airport and flew away Sunday afternoon. Before he left, Prince William said…

“As this is my last opportunity before we leave this afternoon, I would just say, on behalf of us both, how grateful we are to have been welcomed so warmly in the Golden State and the City of Angels.”

Lady Gaga Down Under!

Gaga touched down in Sydney at the weekend for a one off gig taking place this week.

The private concert at Sydney Town Hall for 1,000 guests takes place this coming Wednesday. Fans had to enter a special draw through Facebook, posting a picture showing how much they love Gaga, to win tickets for the show.

On arrival in Australia Gaga tweeted… 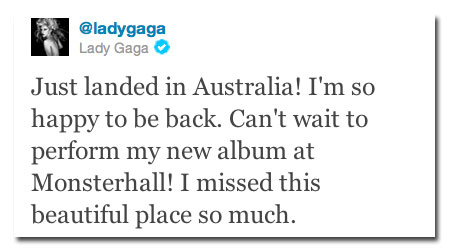 Are you attending the gig? Let us know by tweeting us @rukkle

A Rihanna concert was cut short Friday night after a small fire broke out above the stage. The show at the American Airlines Centre in Dallas, US went off without a hitch until a pyrotechnics display above the singer caught fire.

Following the fire and cancellation of the gig, Rihanna tweeted… 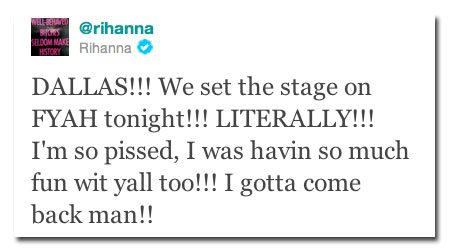 Watch footage of the fire here