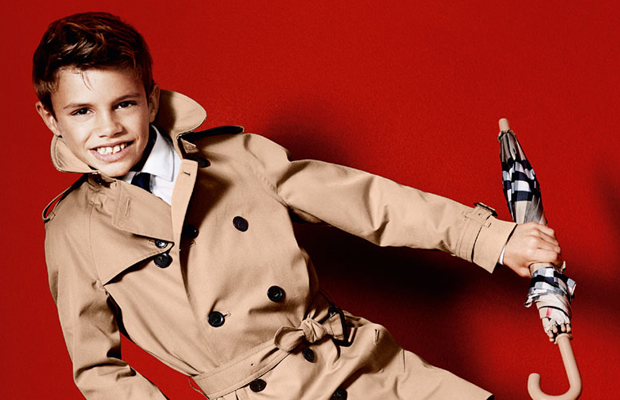 David Beckham’s son Romeo is the new face of Burberry.

The 10-year-old will star in the new campaign for the label’s Spring/Summer 2013 collection.

Romeo Beckham, the 10-year-old son of David and Victoria has launched his modelling career this week.

Beckham stars in the spring/summer 2013 campaign for the British brand Burberry alongside Cara Delevigne and Edie Campbell and has been praised as a “joy to work with”.

Burberry’s creative director Christopher Bailey said “We had such fun shooting the campaign and I think that comes through in the images.”

“Brooklyn will just wear his soccer shirts and T-shirts, but Romeo is the fashion one, so he’ll go for skinny jeans and a vintage T-shirt and funny hats. One Christmas he asked for a pair of Spats shoes.”

Burberry, which is headquartered in London, was founded in 1856. Romeo appeared on GQ’s Best Dressed “Men” list in 2011.