Nike Put’s Its Foot In It! #Geddit? 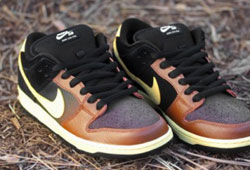 The sneakers were named after a British security force remembered for its civilian attacks during the War of Independence.

To mark St Patrick’s Day, Nike this month released a new trainer called the ‘Nike SB Dunk Low Black and Tan’, which they were promoting as a tribute to the alcoholic drink of the same name, made by mixing Guinness (‘black’) with lager or pale ale (‘tan’).

However, the term was originally coined for a British paramilitary group in the 1920′s, known as the ‘Black & Tans’ who became notorious for their brutal assaults on civilians during the Irish war of independance.

Nike officials told Fox News that the sneakers had been “unofficially named by some” and were officially called the ‘Nike SB Dunk Low’.

However, Time has pointed out that one advertisement for the product reads…

“Tis the season for Irish beer and why not celebrate with Nike. The Black and Tan sneaker takes inspiration for the fine balancing act of a Stout (Guinness) on top a Pale Ale (Harp) in a pint glass.”

Ciaran Staunton, president of the Irish Lobby for Immigration Reform, told IrishCentral.com that the choice of name left him speechless, saying the American equivalent would be calling a sneaker “the Al Qaeda” adding “Is there no one at Nike able to Google Black and Tan?”

Along with claiming the product was “unofficially named by some” Nike issued an ‘apology’ for what it admitted was an “insensitive” name. The company said in a statement to Fox News…

“We apologise, No offence was intended.”

What do you think of this story? Let us know your thoughts in the comment section below or share this story on your favourite social networking site…