JT has made good on his promise to take Kelsey De Santis to the Marine Corps Ball. 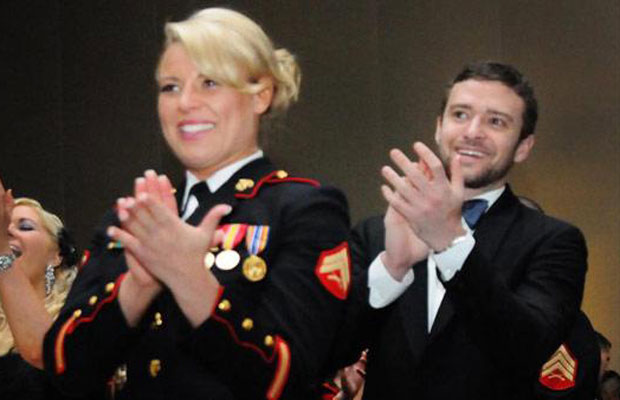 The singer and actor said on his website, the date was “one of the most moving evenings” of his life.

Justin Timberlake is a man of his word! On Saturday, he attended the Marine Corps Ball with Corporal Kelsey De Santis.

De Santis, who is stationed at the Marine Corps base in Virginia, asked Timberlake to be her date over YouTube after another Marine asked his ‘Friends With Benefits’ co-star Mila Kunis to attend a Marine Corps Ball, an invitation that timberlake persuaded her to accept during a TV interview!

In a post on his website on Sunday, Timberlake said that he was “almost brought to tears” during a video tribute to Marines during the Ball.

Of the time he and De Santis spent together, he wrote…

“She seemed to me to be so humble and honest… Very cool. She also simultaneously seemed like she was nervous about the whole evening and if I was going to enjoy myself. ‘Are you ok?’ she asked 2 or 3 times. “I hope you are having fun. I know you will once my crew of friends get here to the table.’ ”

He went on to say…

“I have to tell you, it’s not every day that I meet a 23 year old girl and she’s more worried about if I’m having fun or if I’m comfortable! It hit me all of a sudden that these were the type of people that look after us and our freedom… Humble, concerned for others before themselves… This was the type of person our Marine Corps was building. I was really blown away.”