Both Usher and T.I. have hit the stage for duets with Taylor Swift in Atlanta. 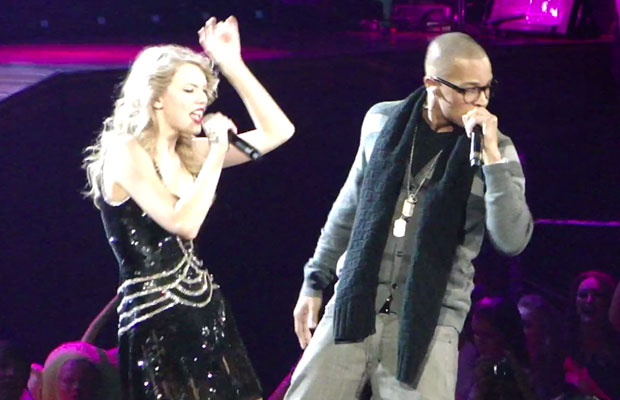 Watch both performances, including ‘Yeah’ and ‘Live Your Life’ in the videos below.

Taylor Swift’s ‘Speak Now‘ tour made its way to Atlanta over the weekend, and it continued it’s trend of featuring surprise guests with the appearance of two local superstars.

On Saturday night, Swift welcomed Usher to the stage, and the two of them teamed up on the rapper’s 2004 hit song ‘Yeah’. At the end of the performance, even Usher’s two sons ran up on stage to join the limelight!

On Sunday night, Swift brought out another member of Atlanta’s music making elite, T.I. The rapper (who was just released from an Atlanta area halfway house after serving just under a year for parole violations stemming from a federal weapons charge) teamed up with Swift on ‘Live Your Life’, with Taylor filling in for Rihanna.

Sunday’s performance was slightly more theatrical, as Swift started out alone before calling for T.I., who entered from backstage and then made his way down a big staircase that serves as the centerpiece of Swift’s ‘Speak Now’ set.

Watch both performances here and let us know what you think in the comments below.

What do you think?

We want to know what you think of these performances. Leave a comment below or tweet us @rukkle.