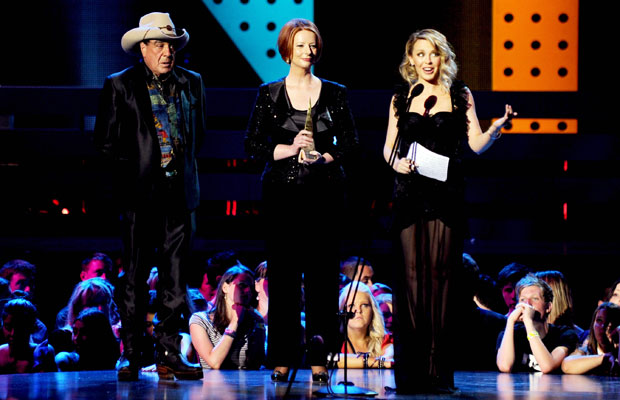 Kylie Minogue has been honored at the 25th anniversary celebration of the ARIAs at Sydney’s Allphones Arena.

The singer was inducted into the ARIA Hall of fame by Australian Prime Minister Julia Gillard.

In the company of her sister Dannii and her boyfriend Andres Velencoso Kylie Minogue was inducted into the ARIA Hall of Fame by Prime Minister Julia Gillard in Sydney over the weekend.

During her acceptance speech (below) Minogue said she felt “amazement (that) I am still here… gratitude, humility, wonderment and pride”.

The singer, who has sold more than 68 million records also said “I’m always bragging about our country wherever I am in the world and tonight’s award means so much to me”

After thanking her manager Terry Blamey and her mentor Michael Gudinski, she gave special mention to her boyfriend saying “My boyfriend Andres, who is in love with this country … you’ve made him feel very welcome”

Watch her full acceptance speech here as well as a red carpet interview before the show.