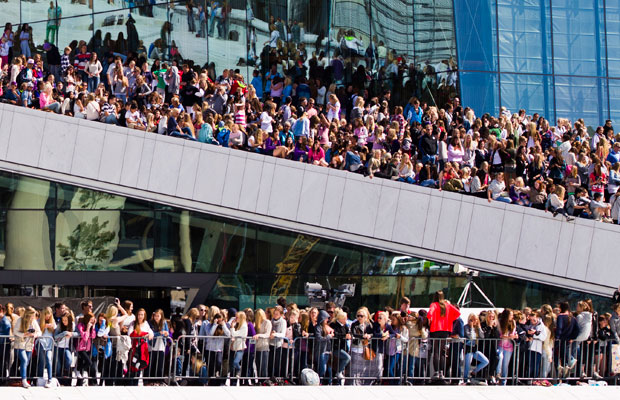 Justin Bieber kicked off his European tour in Norway this week.

It wasn’t long of course before anarchy descended and a state of emergency was threatened in Oslo.

After it was announced that Justin Bieber would be performing a free four-song show outside of the Oslo Opera House on Wednesday this week, 15,000 of his fans stormed the nations capital, bringing down its mobile network and by late afternoon, authorities were “on the verge of declaring a state emergency”.

Billboard writes that a Norwegian police officer said fifteen girls fainted at one point. It was also reported that emergency workers had to cut open a guardrail after a girl’s foot became stuck in it.

So, with the rising chaos on the streets, Bieber was forced to take to Twitter to beg, repeatedly, for his legions to, well, calm the fuck down…

NORWAY – please listen to the police. I dont want anyone getting hurt. I want everything to go to plan but your safety must come first…

…for the show to happen u must all listen to the police. we are all concerned for your safety and i want what is best for u. please listen

The singers twitter messages seemed to have had the desired impact as Police then allowed the concert to go ahead, although they made the Biebs bring forward the start time by about thirty minutes, so that, and we’re just guessing here, the bloody thing could just be over already!