Bruce Springsteen & Paul McCartney – The Moment The Mic’s Were Cut 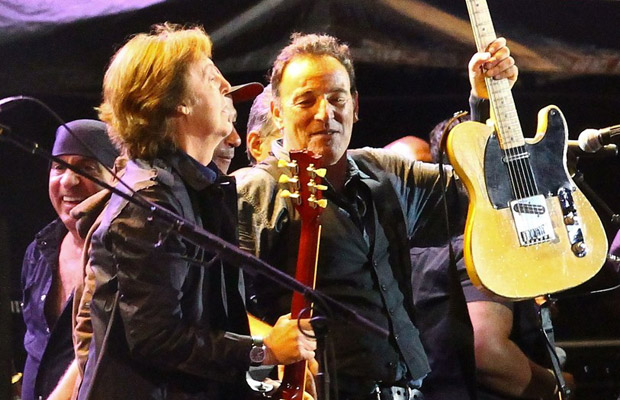 Even Paul McCartney and Bruce Springsteen are not allowed to play past curfew!

The music stars’ microphones were unplugged around 10:40pm during a Saturday night Springsteen concert in London.

Bruce Springsteen and Paul McCartney had their microphones cut off on stage in London’s Hyde Park Saturday night after Springsteen had exceeded a noise curfew.

The iconic musicians played renditions of the Beatles’ ‘I Saw Her Standing There’ and ‘Twist and Shout’, but got cut short by organisers for breaking the curfew before they could thank the crowd.

Introducing McCartney to the stage, Springsteen told the Hyde Park audience “I don’t want to make a big deal out of it, but I’ve been waiting about 50 years [to do this].” E Street Band guitarist Steven Van Zandt later took to Twitter to criticise the authorities for pulling the plug on the show.

The cops got nothing more important to do? How about they go catch some criminals instead of fucking with 80,000 people having a good time?

In a statement on the Hard Rock Calling website, the Live Nation company said it was “unfortunate” that the “three hour plus” performance had been “stopped right at the very end”, adding…

“The curfew is laid down by the authorities in the interest of the public’s health and safety, Road closures around Hard Park are put in place at specific times to make sure everyone can exit the area safely.”

Watch Springsteen and McCartney’s Hard Rock Calling performance above and see the point where the mic’s were cut at 10 minutes 30 seconds into the video.