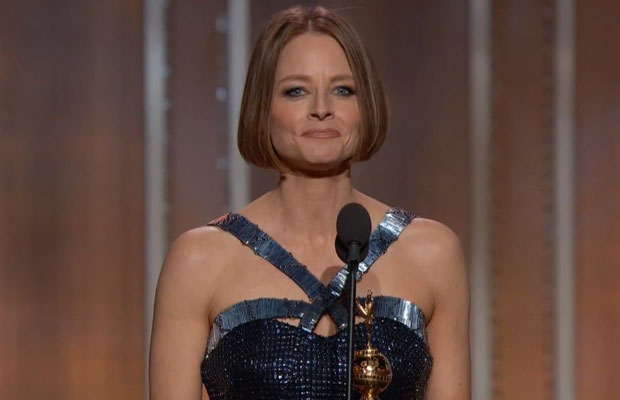 Jodie Foster came out as she accepted the Cecil B DeMille Award at Sunday night’s Golden Globes.

She spoke publicly about her sexuality for the first time and thanked former partner Cydney Bernard – whom she described as her “ex-partner in love but righteous soul sister in life”.

Accepting her Cecil B. DeMille lifetime achievement award at Sunday’s ceremony for her “outstanding contributions to the world of entertainment,” Jodie Foster delivered a deeply personal speech – which brought much of the A-list crowd to tears – in which she spoke out about her sexuality in a way she never has.

“I already did my coming out about a thousand years ago, back in the stone age,” the star said as she accepted the award. “In those very quaint days when a fragile young girl would open up to trusted friends, and family, coworkers and then gradually, proudly, to everyone who knew her. To everyone she actually met.”

“But now apparently I’m told that every celebrity is to honour the details of their private life with a press conference, a fragrance and a primetime reality show.” Foster continued by saying “Seriously, if you had been a public figure from the time that you were a toddler, if you’d had to fight for a life that felt real and honest and normal against all odds, then maybe you too might value privacy above all else. Privacy.”

You can watch the full speech in the video above.