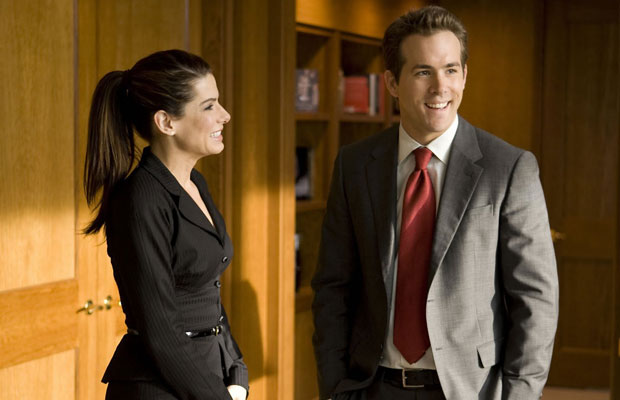 We thought what better time to look at some of cinema’s worst bosses of all time. We’ve also thrown in some tips for you on how to handle similar bosses!

‘Horrible Bosses’ is in fact the second time Kevin Spacey has portrayed the employer from hell. His first portrayal was as ‘Buddy’ the movie mogul, who hires ‘Guy’, a fresh faced hopeful just out of film school, in the movie ‘Swimming With Sharks’.

Buddy is a sadist who berates Guy at every opportunity, the stand out scene being when he complains about being given the wrong brand of sweetener and telling him “You are nothing! If you were in my toilet I wouldn’t bother flushing it. My bathmat means more to me than you!”… ouch!

How to handle this boss: Quit, you can’t win with the Buddys of the world, it’s just a test that’ll drive you psychotic or make you an asshole too.

Hardnosed tough cookie Margaret (Sandra Bullock, an American) is a Canadian boss; to not get deported from the US she pressures her American wage slave, Andrew (Ryan Reynolds, a Canadian) into pretending they’re engaged. Cue lots of awkward shenanigans as they have to keep the charade up, despite hating each other.

How to handle this boss: If the movies have thought us anything, it’s that if you ever have to pretend that you’re in love with someone, you always fall in love with that person for real, so just go with it!

Bernie is a terrible boss; he invites two of his minions, Larry and Richard to his beach house for the weekend with plans to have them murdered for discovering some financial discrepancies.

The problem is that Bernie ends up getting murdered himself and poor Larry and Richard have to resort to pretending his corpse is still alive so they can carry on partying!

How to handle this boss: Generally when you find a dead body you should call the authorities. Not walk it around making it wave and letting oblivious girls have sex with.

Meryl Strep as Miranda is pretty much an insane fashion queen in ‘The Devil Wears Prada’, throwing near impossible tasks at bookish Andy (Anne Hathaway).

In one instance she insists on an advanced copy of the latest Harry Potter book for her kids, which is about as difficult as Meryl Streep avoiding an Oscar nomination.

How to handle this boss: Stick it out for as long as you can until you can earn some respect by telling her to stuff her job and getting a good reference.

“Coffee is for losers!” screams Blake (Alec Baldwin) as he foul mouthedly abuses the staff of ‘Mitch and Murray’.

Technically he may not even be their boss but he acts like he runs the world. He’s been sent to motivate the salesmen at the company, and that he does… in an incredibly aggressive way.

How to handle this boss: I wouldn’t cross this guy, listen to him.

Bill (Gary Cole) is the quintessential asshole boss, smarmy, sleazy and telling you he’s gonna need you to come in Saturday while he slurps his coffee. He’s the type of power hungry middle management that makes you wish we all still lived in caves eating berries and capitalism was thousands of years off and you could just bash him in the head with a rock for being a jerk.

How to handle this boss: Get friendly with his bosses and watch him squirm.

There’s nothing worse than your confident, patronising, phony boss being younger than you, but that’s what happens when Tess McGill (Melanie Griffith) gets a new job as a secretary to Katherine Parker (Sigourney Weaver). To make matters worse, she takes credit for Tess’ ideas while trying to appear as her friend… you’d pray for a ski accident (which thankfully happens!).

How to handle this boss: Do what Tess does, get cozy with her squeeze.

Your new boss is your ex-girlfriend… awkward! That’s what happens to Tom (Michael Douglas) and his new boss, Meredith (Demi Moore) who wants to reignite the old flame, despite Tom being a happily married father. It’s hard, (giggle), but he manages to get away from her. Then the bitch tries to sue HIM for sexual harassment!

How to handle this boss: Countersue the man-eater… or avoid staying late after work in the first place.

Talk about bosses from hell! John (Al Pacino) is literally the devil, running a law firm that gets all sorts of scum off scott-free. He also drives his latest hotshot employee Kevin’s (Keanu Reeves) fiance insane and to top it all off he also got his mother pregnant years ago… meaning he’s his dad!

How to handle this boss: Be a lawyer with morals and you’ll never meet the Devil….Amen to that.

How to handle this boss: Quit and run to her man!

This post was produced for rukkle by Bren Murphy.