The series about a transgender woman coming out to her family, took the awards for Best TV Series & Best Actor – Comedy Or Musical.

We’re so honored and thrilled to announce that @transparent_tv is the winner of 2 #GoldenGlobes pic.twitter.com/QetZpRF32S

Transparent revolves around a Los Angeles family and their lives following the discovery that their father Mort (Jeffrey Tambor) is transgender.

Accepting the Best Actor award, Jeffrey Tambor said he was so grateful to transgender people for their courage and inspiration…

Accepting the Best TV Series award, creator Jill Soloway thanked the trans community, and dedicating the award to her own transgender parent who inspired the show.

Soloway also dedicated the show’s award to Leelah Alcorn whose death has deeply impacted the LGBTI community. Alcorn is the US teen who recently committed suicide because of a lack of acceptance of her gender identity by her family. 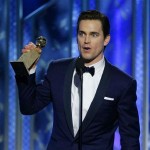 The acclaimed historical HIV drama ‘The Normal Heart’ was also recognised at the Golden Globes, with out gay actor Matt Bomer announced ‘Best Supporting Actor in a TV Movie or Series’.

In his speech he thanked his husband and kids, and also dedicated the award “to the generation we lost and the people we are still losing – I want to say we love you. and we remember you.”