Madonna fans upset over her using the word “gay” to describe kale.

Madonna was participating in a word association game organized by Buzzfeed. 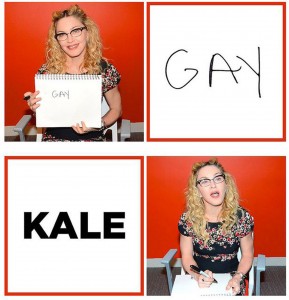 Madonna fans upset over the pop superstar’s use of the word “gay” to describe kale. The incident occurred when Madonna was participating in Buzzfeed’s word association game.

The 55-year-old gay icon has previously been known to her fans as a huge supporter of LGBT rights. However, when asked to describe kale with one word, she wrote ‘gay.’ She used ‘gay’ as her answer for one word associated with Vladimir Putin too. As well, she described Hilary Clinton as ‘mean’ and the crocs footwear as ‘effective.’

Fans expressed their feelings over Madonna’s use of ‘gay.’

‘Saying kale is “gay” is meant to convey that she doesn’t like it, so it is an insult. I am SO TIRED of people using “gay” in a negative context.’

Another fan stated that,

“Madonna is as culturally sensitive as a bull in a china shop. Really. She puts her foot in her mouth constantly.”

Watch Madonna’s video for her hit single, Hung Up, and then comment below on if you believe that Madonna crossed the line.