Four Things We’ve Learned From Orange Is The New Black

Last weekend season two of Orange is the New Black launched on Netflix to huge anticipation.

For those not in the know it’s a series loosely based on the memoir of Piper Kerman (Chapman in the show) and her time spent in a women’s prison.

In the show Piper is sent to prison for 15 months for smuggling drug money a decade earlier when she was a young, stupid and gay, but now she’s engaged, smart and “straight” and looking at a new life locked up with the large array of hilarious, touching and scary characters.

OITNB along with House of Cards, Hemlock Grove, Lilyhammer and the fourth season of Arrested Development are “TV” shows produced by Netflix and for Netflix, the streaming service that’s quickly taking over the world of home entertainment. 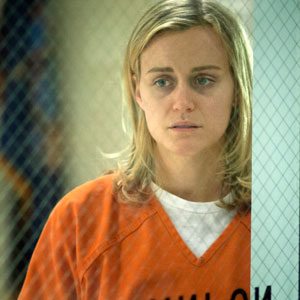 Love, lust and heartbreak aren’t exclusive to any sexual orientation. We can all understand Piper’s confusion and conflict when’s she’s confronted with her ex-girlfriend Alex (who is responsible for landing her in prison in the first place).

We can all laugh at Lorna’s insistence that she’s all about her fiancé and future straight life while getting finger banged to ecstasy by Nicky in the showers.

We can all ooze sympathy when Sophia, a post op transgender woman, is denied her required hormone dosage and begins to see stubble appear.

2. There’s not enough varied female characters on TV but there really could and should be… 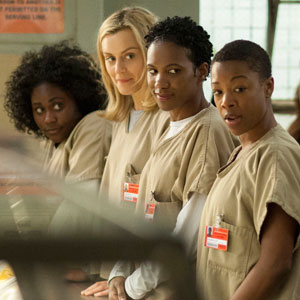 …because we’ll watch them! There’s 20 plus female characters in OITNB and each one is as different as the next. This is something that traditional TV shows have been avoiding for decades.

When pushed someone might say Sex and the City or Girls… but they’re really just the clichéd female characters altered for age and wealth.

Now granted the setting of a women’s prison lends itself to the opportunity for showcasing such a variety of female characters but it’s a step in the right direction which will hopefully encourage other TV producers to follow suit. 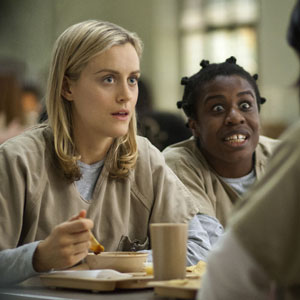 Orange is the New Black? Seriously? A hokey fashion joke in a title? Also the inmates only wear orange when they’re new in the prison, they’re changed to beige soon afterwards.

It’s so bad that I’ve tried to persuade myself that it’s smart. Is being “orange” (new to prison) like being “black” (subject to prejudice in society)?

Nope it really is a just a hokey fashion joke.

4. Say what you want about Lost but it did give us something…

OITNB borrows Lost’s flashback structure. We have a large cast of character’s trapped together somewhere, say a prison or a mysterious island. As we follow the stories in their current situation a different character’s backstory is concentrated on in flashbacks.

In OITNB’s case it’s been a slow reveal as to how different characters find themselves incarcerated, with other’s it’s about building the character before the slow reveal. Some flashbacks flip what you thought you knew about a character on it’s head (see the fourth episode in season two). I