Now that the Sochi Olympics have come to an end, rukkle reveals the gay Olympians results and medal standings.

Prior to the Sochi Olympics, OutSports released the names of 7 out gay Olympians. All of which are female and identify as either bisexual or lesbian.

Now that the Sochi Olympics have come to an end, rukkle provides you with the results of all the gay Olympians.

Sanne van Kerkhof is a Dutch speed skater who competed in the 2010 Winter Olympics in Vancouver. Previously, she won gold in the 3000m relay at 2014 European Championships in Dresden, Germany.

At the Sochi Olympics, she competed in the Ladies’ 3000m Relay, but her team didn’t make it through to the finals.

Anatasia Bucsis is a Canadian speed skater, who competed in the 2010 Vancouver Olympics.

In competition at the Sochi Olympics, she came 27th in the Ladies speed skating 500m race.

Barbara Jezeršek is a cross country skier from Slovenia, who last competed in the 2010 Vancouver Olympics.

Jezeršek competed in four different cross country events at the Sochi Olympics; however, she failed to place in any of them.

Cheryl Maas is a Dutch snowboarder that last competed in the 2006 Torino Winter Olympics. Maas is famous for being the first woman to perform a backside 900 in competition.

Mass was competing in the Ladies’ Slopestyle at the Sochi Olympics. She finished 20th overall in the world.

Belle Brockhoff is an Australia snowboarder, who was competing in her first Olympics. Brockhoff managed to place 8th in the Ladies’ Snowboard Cross Finals.

This is the first time that females have been allowed to compete in ski jumping in the Olympics. Daniela Iraschko-Stolz is an Austrian ski jumper who took full advantage of this momentous opportunity. She received a silver medal in the ski jumping event of Ladies’ Normal Hill Individual. 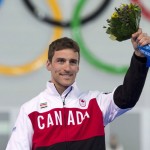 Twisted Element, a gay bar, sponsored a straight Canadian athlete. R.J. Fafard is the owner of Twisted Element in Calgary, Canada. He became friends with Canadian speedster, Denny Morrison, and decided to sponsor him. Morrison was cheered on by Fafard in Sochi, as he won a silver and bronze medal.

Source: All results came from the official Sochi Olympics 2014 website.