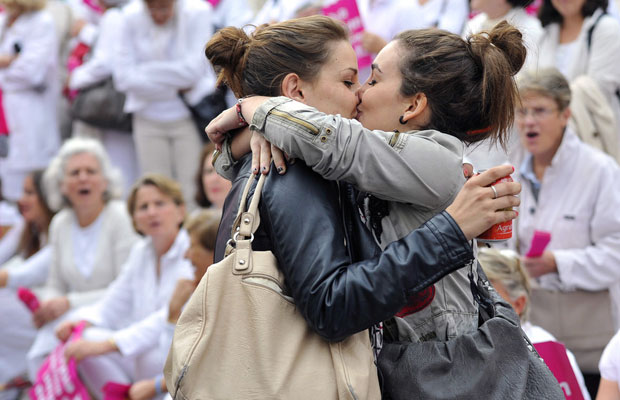 Two women have been photographed kissing in front of anti-gay protestors in France.

This is the image of the two young woman kissing in the middle of angry demonstrators during an anti-gay marriage protest in Marseille.

Two straight women kissing one another in front of a group of anti-marriage-equality protestors in Marseille, France, have gone viral after the moment was captured on camera by a French photographer.

The protestors who gathered in Marseilles yesterday to protest a bill allowing same-sex couples to marry and adopt can be seen gasping in the background at the sight of two counter-protesters having a make out session!

The picture, taken by AFP photographer Gérard Julien, went viral on social media and has all the ingredients to become a symbolic image of the movement in favor of marriage equality.

Interviewed by French gay magazine Tetu the two young women explained they are both straight, but wanted to draw attention to the issue with a pure and simple gesture of solidarity.