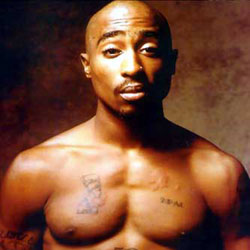 The five-minute tape, shot in 1991, shows the rapper being pleasured orally while rapping and dancing.

It didn’t take long for negotiations to heat up between the seller of a reported Tupac Shakur sex tape and potential buyers.

The tape was shot in 1991 at a house party with a bunch of groupies. Tupac, whose head is shaved in the video, starts off by pulling one of the women in the tape towards him and she begins pleasuring him.

Tupac continues to dance with a cocktail in one hand and a blunt in the other while the woman is servicing him.

TMZ says, “The woman never stops” no matter what Tupac is doing at the time and they also reveal that Money B from Digital Underground also appears on the tape. He reportedly walks over to Tupac whwo extends his arm around him and continues singing and dancing, with the woman still doing her thing!

At the end of the tape, TMZ reports it looks like Tupac is ready to carry the activity to another level, but it stops and it is unclear if another tape exists that shows the rest of the event.

What do you think?

We want to know your thoughts on this story. Leave a comment below or tweet us @rukkle.